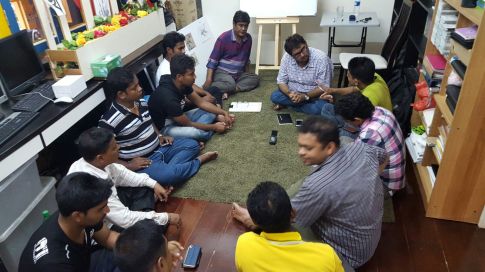 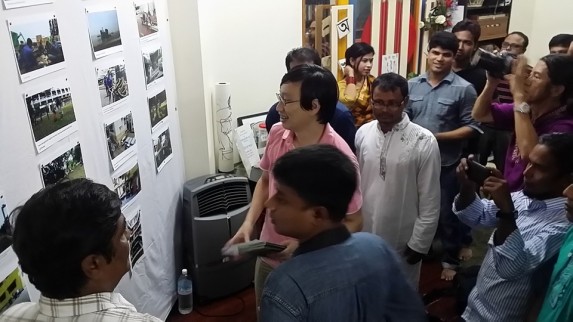 Singapore is a hub of economic activity in this region, with one of the highest Gross Domestic Product in Asia. Migrant workers from South Asia have been attracted to Singapore for its proximity to home geographically and due its higher pay compared to the Persian Gulf.

Migrants from South Asia in particular from Bangladesh are bred in a rich cultural milieu as the descendants of the artistic legacy of Kazi Nazrul Islam and Nobel Laureate Rabindranath Tagore.  A normal Bangladeshi school going child composes poetry and song as a way of living due to the environmentally varied nature of the country rather than a special subject at school. Thousands of Bangladeshi Workers make Singapore their temporary home as guest workers to make their living. Half of them have a school-leaving certificate and a small number of them possess diplomas and college degrees.

These brothers often work at 18 dollars basic per day building and maintaining Singaporean Infrastructure in grueling sun and torrential rain. They have a voice which is stifled by structural constraints such as lack of fluency in English and being at the bottom of the labor hierarchy holding work permits, often at the mercy of the employer’s whims and fancies as their visa can be cancelled anytime. An average migrant in the construction and shipyard sector makes about 600 to 700 dollars per month. Often his salaries are not paid in time and take a minimum of two years to pay back the economic cost of migration back home.

I observe a lot of migrant related activity (if not activism) over the past one year in Singapore, with plenty of events, competitions and citizen centric engagements, which brings the migrant regularly back into the mainstream conversation. Most of these events are kind, create mini celebrities out of migrant brothers, who release books, music cds and perform in theatrical plays. We ‘like’ them on social media, sometimes without realizing that many of these brothers have attended college, and have been performing/published artistes back home. They are made migrants due to economic realities back home. I am fortunate to know them in person and is a delight interacting. They are also normal writers and artists who are innovative in plying their trade and have a day job to pay their bills. Many of the strategic diasporic elites do that too, right?

A lot of these famous migrants are nurtured by Mr AKM Mohsin, Editor of Singapore’s only Bengali Language newspaper Banglar Kantha and Founder of Migrant Cultural Space Dibashram who started off as a pioneer helping out migrants in the early 1990’s writing letters for migrants back home. He then started a community paper in 2006, to serve as the voice of the diasporic subaltern. His platform has helped catalyze the Migrant Poetry Competition and Migrant Awareness Week among other events.

Migrant Poets such as  TEDXSingapore Speaker Zakir Hossain and newly minted author Md Mukul are products of the Banglar Kantha platform. They are invited to be toast of town at Poetry events at Artistry, a chic downtown cafe and national poetry festivals. This celebration is needed but how much of this celebration is helping redeem real issues such as injury claims and unpaid salaries?

Migrant literature as a genre promoted by Mr Mohsin and his cultural group Banglar Kantha Literary Association is a long term effort even when the spotlight was not shining. Migrant culture is a long term endeavor with sweat and toil, with lots of personal sacrifices with financial hits and burning volunteer weekends rather than one event every year for publicity sake.

Migrant activism should create space for silent conversations through cultural mediation rather a tick the box measure.